A Genie and Three Wishes 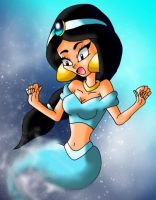 MANY YEARS AGO I was in a suq in the Middle East when I came across this very interesting bottle. It was very dusty and I couldn’t really tell what colour it was so I started to rub it to get the dust off. There was a flash of light, a puff of smoke, and there standing on the bottle was a small, attractive lady Genie.

I was astonished and quite speechless. Hands on hips the little Genie stared at me with piercing black eyes, “What’s the matter sailor, cat got your tongue; come on you know what to do now with me!” I glanced around furtively to see if anyone was taking any notice of me staring at a diminutive figure on the top of the bottle I was holding in my shaking hands. No one was paying the least amount of attention to me. Being a sailor, I knew exactly what to do with the little lady and the bottle. I stuffed her in my pocket, paid for the bottle and rushed off to find a quiet spot to claim my prize!  

I picked a little coffee house where there was only one elderly man dozing at a table out front and a waiter sitting on a stool reading a newspaper. I settled into a secluded table, placed the bottle on the table and ordered a cup of chai. After my chai had been delivered and the waiter retreated to his stool and newspaper, I fished the little lady out of my pocket and placed her on the table. Kicking, squirming, and picking pocket lint from her eyebrows she hollered at me, “You son of a diseased sea dog, is that any way to treat a lady that you expect favours from? May the fleas of a thousand camels infest your ears for eternity!”

She then sniffed the air and exclaimed, “That chai smells wonderful, I haven’t had any for at least two hundred years. I must have some; upon which she climbed up on the cup and cupped her hands into my chai to drink. She promptly fell off the cup screaming more curses about camels and fleas infesting bodily areas, how hot the chai was, and that I should have warned her.

I was more than a little nervous as I looked around to see if anyone had taken notice of the commotion. The man out front was still dozing comfortably, the waiter still engrossed in his newspaper. Amazing I thought, as the noise this little Genie had just made was, in my estimation, the equivalent of a heavy metal band.

Blowing on her hands the Genie fixed me again with that piercing stare. “WELL,” she said, in that manner which all men know coming from a woman means you are in serious doodoo. Without a pause she continued, “You want your three wishes don’t you!” I started to answer that I did, but with one hand on her tiny hip and a defiant finger pointed at me she uttered a crushing, “SILENCE.” Nervously I glance around. “Don’t worry you big ape, no one can hear or see me but you,” she hissed. That was small consolation I thought. Now I would merely look like a nut case talking to a bottle and some chai.

“Now, then the Genie said, “I need to explain the rules to you.” Rules I sputtered. What do you mean rules, I rubbed the bottle, I found you, and I get my three wishes. The Genie was amazingly silent. She stood there looking at her fingernails. “That hot chai ruined my nail job,” she mused. Then she looked at me demurely, batted her long eyelashes, and in sexy, soft, silky voice that would have tamed a wild lion purred, “I believe I have something you want, correct?” I had to agree she certainly did. “Well then Bubba,” she said more matter of factly, “put some of that chai in your spoon so I can drink it and we will discuss how this is going to go down.

I did as she wanted. With me sipping out of the cup and the Genie sipping out of the spoon she explained how things would work.  The Genie told me that she had been in the business of granting wishes for a very long time. And over that time the vast majority of those that found her and were granted wishes were men. It was always the same thing, she explained; they wanted more sex, more money, more fame, eternal life; they never thought of anyone but themselves.

She had tired, she said, of granting those kinds of wishes so she had petitioned the Grand Pooba of Genies for a change to her wish granting charter. It was simple: all the wishes she granted would have to be for someone else and at least one would have to be for a woman. The Grand Pooba thought this was quite an idea and duly amended her wish granting charter. That was the deal my diminutive Genie said with a great big grin on her face. Take it or leave it.

I could see the merit in having the wishes granted to somebody else. But as I didn’t have anyone at the time that was in desperate need of having a wish fulfilled, I asked if there was any possibility of having them deferred until I did? My little Genie was silent.

I began to worry. Then, she exclaimed, “I will leave the bottle with you. I will charge it with three blank wishes for your use. When you want to use them, just rub the bottle until it turns clear then think of your wish. Be warned. If you use any of the wishes for yourself, you will be turned into a wart on the back of a frog that has been stepped on by a flea-infested camel. The same if at least one of the wishes isn’t used for a woman. Do you agree to that?” I readily agreed. With that she touched the bottle turning it a brilliant green colour and then in a flash and a puff of smoke vanished.

I never saw her again and used the wishes as she required.

We all have three wishes that we can use. What are you using yours for?